In this article, I’ll be guiding you on how to remove flow restrictor from kitchen faucet.

A flow restrictor is installed to regulate the amount of water flowing out of the faucet.

Clean water is not available in sufficient quantity; that’s why there is a law to install taps with flow restrictors in the bathroom, kitchen among other areas.

They regulate water pressure which saves water in the long run.

However, it  becomes a problem if the slow water flow inconveniences you when washing dishes.

With time, the flow restrictors tend to gather mineral particles, especially if the water has many minerals.

Also Read on early signs of a busted water heater.

It is advisable to remove the restrictor to wash out the minerals to avoid water blockage in such cases.

How to Locate a Water Flow Restrictor

Some manufacturers design how the unit holds the screen screws into or on the faucet’s end.

Carefully inspect the unit you unscrewed because the flow restrictor is likely to be built on it.

Steps On How To Remove Flow Restrictor From Kitchen Faucet

A flow restrictor and an aerator are sometimes combined, and you have to remove the aerator first.

If the kitchen faucet has a swivel or stationary spout, its aerator is fixed at the end of the spout.

In the case of a pull-down faucet, it’s located behind the faucet head.

In the old design faucets, the aerator is a female-thread fitting that can be unscrewed with fingers.

The modern designs have a male thread which will require more force to detach it.

If you cannot remove it with bare fingers, use a dry cloth to hold it, and in some cases, you may need pliers.

Even when using the pliers, it is good to wrap a cloth around the aerator to avoid damage. 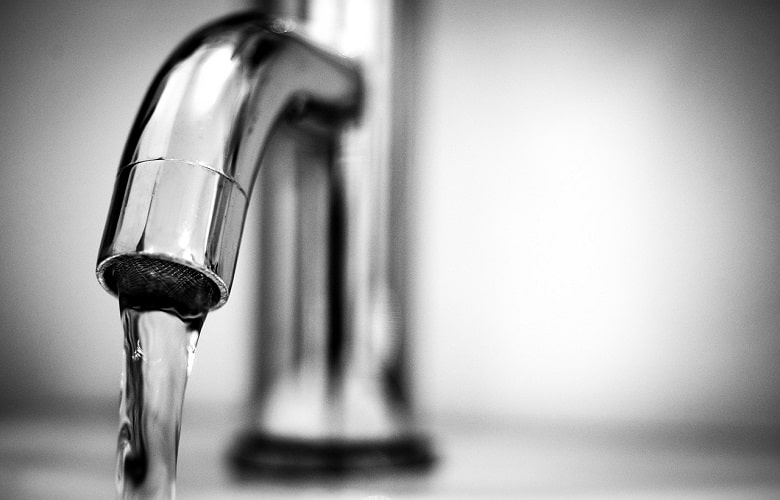 Pull the spout out and then clip the hose to avoid drawing back.

Hold the collar using pliers at the hose end, then unscrew the spray head.

Make sure you arrange all the detached parts in the correct order to make reinstalling an easy task.

Check for the aerator inside the spray head or the collar depending on the faucet model.

Remove the aerator slowly with the help of a flat-head screwdriver. Ensure you don’t make a hole on the screen.

Inspect inside the hole to see if there is a disk with holes; this is the flow restrictor.

After you have separated the aerator from the faucet, you will notice a screen with multiple tiny holes behind the aerator head.

How to Clean an Aerator or Flow Restrictor

In most cases, the main reason for removing a flow restrictor from kitchen faucet is to clean it.

However, in some cases, one may be planning to remove it permanently to increase water flow in their sink.

As I mentioned earlier, particles that collect as the water flows may block a flow restrictor.

When a lot of particles collect, they cause blockage and reduce water flow which leads to inconvenience.

Cleaning an aerator is simple; you need to backflush it in the bathroom faucet.

If you notice that it is still clogged after flushing, soak it in vinegar all night for the scale to fully dissolve.

To clean the flow restrictor, soak it in vinegar all night since its pinholes are most likely to have been blocked by scale.

You can soak the aerator and the flow restrictor together if they are separate.

The following day, they will all be free from the scale, and you can install them back to the kitchen faucet.

If the scale is more minor, you will only soak for some hours, then reinstall them back.

Check my post on the best stainless steel garden hose

Final Thoughts On How To Remove Flow Restrictor From Kitchen Faucet

You now know the steps on how to remove the flow restrictor from kitchen faucet.

It’s good to check your faucet in case you notice that the water pressure has reduced.

However, if you plan to remove the flow restrictor to increase water flow, note that it comes with some drawbacks.

Debris and other particles will flow through with the water, and this can be dangerous if consumed.

It may lead to infections such as gastrointestinal problems, which can be fatal.

Make sure you read the faucet’s manual before uninstalling it.