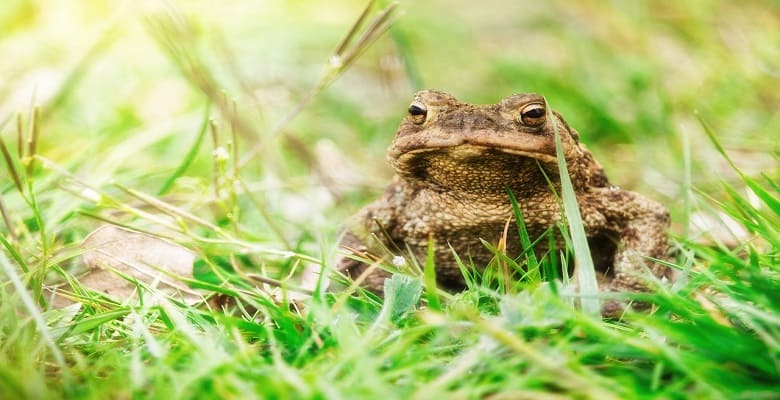 Even though frogs may not seem tasty to humans, dogs like them.

As summertime approaches, your dog might spend more time outside, and that trilling sound from nearby could translate to an early lunch snack for your pet.

But depending on the type of toad, your dog may get more than it had bargained for.

If your dog ate a frog, you should observe them for any signs of foaming, vomiting, and loss of appetite. Use a clean and moist towel and gently wipe the pet’s mouth and gum to clean the toad’s toxins. Take your pet to the vet if the symptoms worsen.

Can A Dog Get Sick from Eating a Frog?

Most frogs and toads secrete some substance through their skin that is foul-tasting or highly toxic.

The secreted chemicals that are highly toxic will be absorbed faster through your dog’s nose, mouth, and eyes.

As your pets attempt to lick or bite the toad/frog, the toad’s glands are compressed, releasing the toxin.

How Long Does It Take for A Dog to Show Signs of Toad Poisoning?

Assuming that your pet ate the Cane Toad or the Colorado River Toad which both secrete bufotoxins associated with irregular heartbeats, tremors, changes in the heart rate, and seizures, the initial signs will be similar to the mildly toxic toads.

The initial signs include pawing at the face, drooling, and vomiting.

The signs will progress to shock & neurological signs within half an hour to a couple of hours followed by death.

If you suspect that your pet’s exposed to one of these toads, it’s important to take it to emergency room immediately.

Are All Frogs Toxic to Dogs?

Not all frogs are typically considered to be harmful to dogs.

For example, the yellow-spotted dart frog (Oophaga histrionica) secretes mucus that is toxic if it comes into contact with even small wounds or grazes on the skin.

The poisons within these frogs may also end up in any water source adjacent to them, so when they are swallowed by dogs, the toxins may cause serious side effects, including nausea and vomiting.

Some have also experienced lowering of blood pressure levels and slow heart rates after being contaminated by this type of amphibian.

If you can identify the type of frog your dog has eaten by checking out its distinctive markings or looking up pictures online, then you may be able to find out what kind of poison it contains and whether or not you will need an antidote to treat them.

It’s important to note that there are two sides to every story; however, while some vets contend that dogs cannot get sick from eating frogs, others report that frogs are indeed harmful to dogs.

In 2015, a veterinary scientist named Dr. Karla Orta described a case in which a one-year-old Beagle was rushed to an emergency clinic after swallowing a frog.

The vet stated that the dog was nervous and had diarrhea for over 12 hours after the incident. Upon further inspection, X-rays revealed that there were parts of the frog stuck inside its stomach.

After removing it from its stomach, they dissected it and determined that it belonged to a species called “tree frogs.”

This is not the only such case of dogs eating frogs and getting sick as a result. Another incident involved a one-year-old dog named Ruby; she was taken to an emergency care center after swallowing a frog.

Fortunately, this case had a better ending: The vet operated on her and successfully removed parts of the amphibian from her stomach and intestines.

While it might be said that these incidents are very rare, you would still be well advised to take your dog to see your Veterinarian if it swallows or eats part of any frog.

Even though some researchers claim that there is no danger of sickness when frogs are integrated into a canine’s diet, others suggest otherwise.

Some vets have reported cases suffering from diarrhea and vomiting after eating frogs.

Can A Dead Frog Hurt a Dog?

The answer is no, a dead frog can’t hurt a dog, but that’s not the case with toads.

Even though it’s hard to differentiate between a toad and a frog, the major difference is that: toads live on dry land while frogs prefer a wet environment.

Toads have dry skin, while a frog often has wet and slimy skin commonly associated with amphibians.

According to Dr. Matt Allender, an exotic and zoological vet based at the University of Illinois, knowing the difference between a toad and a frog could be trivial, but it’s worth it. (Source)

He further explains that toads in Central Illinois aren’t as poisonous, and you shouldn’t worry if your pet dog shows up at your doorstep with a toad in its mouth.

Even though your dog may excessively foam, it’s not usually life-threatening. You only need to carefully wash out your dog’s mouth with water and be gentle enough that it doesn’t swallow any water.

However, if you live in Texas, Hawaii, or Florida, a trip to the emergency room is a must to save your dog, should you suspect they’ve fed on a toad.

The bufo toad, also known as the cane toad, is common in these regions and is highly toxic. It secretes bufotoxins, leading to foaming, vomiting, shaking, seizures, diarrhea, and heart arrhythmias.

How Do I Know If My Dog Ate a Frog?

How would you know if your dog ate a frog?

There’s really no way of knowing whether your dog ate a frog or not without seeing it happen or inspecting his stomach contents after he barfs them up.

Many wild animals are potentially toxic to dogs, including frogs which can carry both infectious diseases and toxic substances on their skin that are poisonous to dogs if they ingest them.

If your dog ate a frog, there’s no specific antidote for this sort of poisoning, so you must contact the Veterinarian for treatment options as soon as possible.