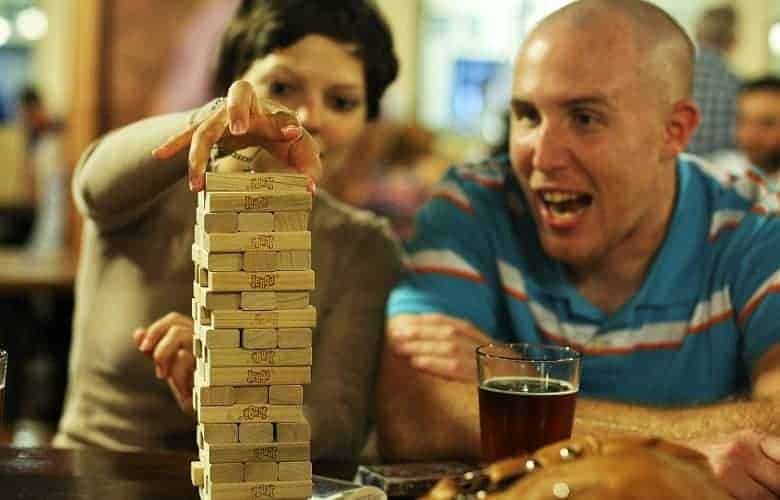 Nothing feels refreshing than having a few BBQ party games with family and friends in the yard.

Outdoor party games keep the guests entertained and spiced while waiting for the BBQ to be ready.

The game you choose will depend on the preferences and interests of the guests.

In this article, I have compiled a list of barbecue party games ideas for adults you can choose from.

Cornhole is one of the popular BBQ party games ideas for adults.

Depending on where you come from, it has other different names.

Requirements include a few people, a cornhole, and space in your garden or backyard.

You can choose to play the game either by grouping yourselves in teams or one on one.

Every time you make a single sandbag go through the hole, you earn 3 points.

The main goal is scoring 21 points before your opponent, which is a bit of a challenge.

This game has other different names such as ladder ball, ball rope, hillbilly golf, or ladder golf.

They could throw snakes on the fence or branches as they compete to earn points.

You need three bolas and a ladder with three tiers.

The top tier is worth three points, while the second is two points and the bottom one point.

To win the game, you have to aim at the top tier to have more points.

I’m guessing that you don’t want to play like the cowboys back then.

Horseshoes is another exciting backyard game to play with friends and relatives.

It is an easy-to-learn game, so if one of you knows how to play, they can teach you.

Even though it’s a  throwing game, it can be challenging to win.

To play, you place the stake around about 40 feet apart, but it can be less depending on the yard’s length.

Before you start playing, you can determine the highest score one has to get, for instance, 30, 40, or 50 points.

You can add a pit of sand around each stake to reduce the sliding and bouncing off.

Water balloon toss is one of the simplest BBQ party games.

It helps you start your barbecue by cooling the summer temperatures.

What you do is fill a number of balloons with water, then try soaking your friends.

A single bunch is made of 100 water balloons meaning the whole set has 300 balloons.

The set comes with a secure attachment to the hose to help in filling them with water.

The best part is that it can be played by both adults and children of above 3 years.

The three-legged race is a very cheap game to play at a BBQ party.

The only material needed is something to tie the inner legs of the two players.

You can use a piece of cloth or a bandana, among others materials, to tie the legs.

Ensure the start and the finish lines are marked clearly so that it is visible.

Each time tries racing fast enough to the finish line once they get the signal from the referee.

For the game to work perfectly, ensure you pair players with almost the same heights.

You can purchase these durable race bands for kids and adults.

They are elastic and strong enough to last you in the game.

This classic party game tracks back to the 1980s.

What you do is set your jumbo connect four board, then you and your opponent play in turns by placing discs in the slots on the vertical board.

The primary goal is getting four discs in a row in any direction before the opponent.

You can purchase this yard game giant 4 connect in a row board as it is weather and pest resistant.

It has a beautifully finished leg frame and a bottom bar.

It is easy to transport and can also be set indoors.

Washer toss is a tossing game where you aim at a particular area across the yard to earn points.

This game is a lot like horseshoes and cornhole.

You will require buying a washer toss set, or you can do it yourself if you like.

If one player lands a washer in the center cup, they earn3 points, then 1 point for any other washer on the box.

The winner should score at least 21 points for the game to be over.

Bottle bash is an easy tossing game that is played by tossing a Frisbee then try knocking the bottle off the pole.

Like most of the tossing games, any team or person that gets 21 points first becomes the winner.

Check my post on the best cleats for ultimate Frisbee

Pong golf is a game where golf combines with beer pong.

If you are a lover of golf, you can try this game at your barbecue party.

Just like beer pong, the primary goal is sinking the ball in all opponent’s cups.

You use a golf club to aim the balls instead of tossing them into the opponent’s cups.

Giant yard pong is similar to beer pong, only that here you are using giant cups.

You group yourself into teams where each throws a set of balls at the 6 giant cups.

When a ball lands in a bucket, the bucket is removed.

Any team that eliminates the other team’s giant cups is declared the winner.

The game can also be played in a pool since the cups and balls can float.

Giant Jenga is an exciting game that needs one to be strategic and have good stamina.

To play, you’ll have to stack rows of blocks into a tower by alternating how they lie in every row.

You play in turns where each player removes a block with the hope that it’s not the one that will make the tower collapse.

Any player that removes the block and causes the tower to fall loses the game and leaves other players to continue playing.

You can purchase Jenga giant JS7 from amazon.

It is 26 inches high and can be stack up to over 5 feet tall while playing.

Human ring toss is a fun and friendly barbecue party game to play in your yard.

Both children and adults can play it, so no one is left out during the game.

You need around ten 36 inch inflatable pool tubes and agree on the best distance to toss from.

As you play the game, you’ll find out who has the best tossing skills in the group.

Keep it up balloon game can be played by both kids and adults.

Instead of using all the balloons for house decorations, you spare some to use in barbecue party games.

What you do is inflate the balloons, then compete by finding the player who will keep the balloon up for the longest time.

The one who manages to keep the balloon up longer is declared the winner of the game.

The ring toss game is an easy barbecue party games idea for both adults and kids.

The game involves tossing rings around a bottle, peg or stake.

You can buy this game or try making your own.

When growing up, this was one of my favorite games.

It is also known as the gunny race and is also played up to today.

You’ll need burlap sacks that can reach each player’s waist while allowing enough space for hoping to the finish line.

A four-legged team race is a barbecue party games ideas for adults suitable for a large number of people.

4 people in each group mostly play it at a time.

It requires teamwork to emerge as winners since a single player in the team cannot walk alone.

You’ve to be walking at the same pace so that there is good coordination.

Remember that you have to walk fast enough as you aim at the finish line before other teams.

Badminton is an old-school yet classic game that can be played as you wait for the barbecue to be ready.

The game is played in most countries and is easy to play.

You will need a ball or a shuttlecock and stringed rackets to play the game.

The game can be played as teams or one on one.

Every time you hit the shuttlecock above the net into your opponent’s court, and they do not hit it back; you score a point.

Giant checkers and chess is a relaxing barbecue party games ideas for adults who don’t want to get involved in vigorous games.

You spread the checkerboard on the ground like a blanket.

It is good for passing time as you interact with each other.

It comes in black and white and has a great mix of heights and weight for use by kids.

They are waterproof and UV-protected to resist fading and staining.

There are so many barbecue party game ideas for adults that will keep your guests entertained.

These backyard games spice up things at the party while allowing friendly competition to pass time.

Most games are easy to learn, so do not excuse not to engage in them.

I hope you’ve found a game or two that you can try at your BBQ party.

Don’t be afraid to give the games a try; you never know, maybe it’ll be more interesting than you thought.